Burying Your Head In The Sand 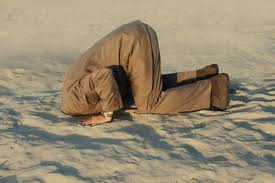 At 8:25 pm on Friday 4 November 2011, 34 vehicles were involved in a pile-up on the northbound carriageway of the M5 Motorway in the UK (which runs from Birmingham to Exeter). Some vehicles exploded while many went up in flames. Fifty one people were injured and seven were later confirmed dead. Police investigations into the cause of the crash centred on a nearby firework display at the local Rugby club – smoke from the display may have been a contributing factor to the crash but this is still under investigation.

In the middle of the pile-up was a liveried lorry belonging to a company of which I knew a number of the managers. On the Monday morning I asked my colleague whether the company had put into place a crisis plan in case their driver was accused of causing the crash. There had been no preparation or crisis plan in place but luckily there was no further mention of their company in the media, and the story moved on.

There is a dilemma, if a crisis or incident occurred whether to react to it, thereby drawing attention to the programme or “keep your head down” and hope that the story goes away. I watched a classic case of this on Channel 5’s Dispatches programme this week – a current affairs documentary programme. The programme was entitled “Secrets of Your Missing Mail” which looked at why mail and parcels are not delivered or turn up damaged. The programme focused on two companies UK Mail and TNT Post. Staff from one of the depot’s of UK Mail were captured in secret filming “running ‘amok’, dropping, throwing, and kicking customer’s parcels”.

The filming of TNT Post alleged that mail delivered by staff on bicycles was not secured at all times. The actions shown on film were quite shocking if you used either company’s services.

Taking my own advice I looked the next day  whether either company had made any reference to the programme on their website. On the TNT Post website there was a link on the homepage, and in the news section there was a video response and other information from Nick Wells, CEO, on the issues raised in the programme.

On the UK Mail website there was no mention of the programme and their lead on their news section was “Pre-close trading update 9th April 2013”. Both companies had decided to handle this very differently. UK Mail may not have wanted to draw attention to the programme, as it is not a hugely popular programme, and hoped that not that many of its existing or potential customers would have seen it.

What are the lessons from these events?

1.My wife, Kim (a BCT Tutor!) has a quote pinned to our office board “Saying as little as possible, hoping for the best, is not a crisis communications strategy”. Perhaps this was the strategy that UK Mail was adopting, or perhaps they had a major communications strategy in place, which they would only deploy if they felt that the story was getting traction, and would further damage their reputation.
2.It is a judgment call by senior managers to decide whether to respond to criticism of the company, or whether by responding you are drawing further attention to the event.
3.If you are not going to draw attention to a criticism of your organisation then I think you should have a media strategy in place, just in case the story breaks and begins to gain public interest.
4.One of the things you should know is the facts and if there is more damaging events to come out.
Coming back to the company involved in the crash on the M5, if I were a senior manager at that company, and saw the crash on TV, I would want to know everything about the driver (check his driving licence, his driving history, and had he been involved in any other accidents), the cab (how old was it, had all the roadworthy checks been done, was it properly licenced) and the trailer (similar checks to the cab). I would also want to interview, and get statements, from anyone from the company who were involved in the incident.

If during the internal investigations there was anything suspicious that came out, such as the cab’s MOT had lapsed, or the driver was convicted of drink driving 20 years ago, I would want to make sure that the organisation was ready if these facts came out in the media. I would have put in place a media strategy to deal with it. It is important to note that this investigation can’t take 3 weeks and needs to be done within hours, if not minutes, of finding out about the incident. So whether or not you decide to refer to the event you still need to be ready if the story breaks.

Making senior managers aware of these dilemmas, and the work which should be initiated immediately after an incident, is part of our role as business continuity people.