KOSB Lays Up Its’ Colours 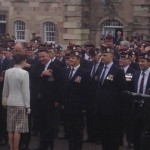 Last week, I went to an army reunion of the members of the Kings Own Scottish Borderers (KOSB) which was the infantry regiment I served with while in the regular army. The regiment was formed in 1689 and was amalgamated with the Royal Scots in 2006. The gathering was especially poignant for a number of reasons. It was Minden day, which the regiment celebrates annually.

The other reason for the reunion was the laying up of the colours (Flags). The colours, for those who are not familiar with the military are extremely important. The role of the colours was to act as a marker of which regiment the solders around it were from and act as a rallying point for the regiment. A party of the best soldiers were assigned to guard them, and it was a great dishonour to the regiment if they were taken by the enemy. Colours for regiments have only ceremonial use, but they still have great importance as a symbol of the regiment. The colours, when they get old and tatty are retired, often to a church.

The soldiers marched on, led by a pipe band and then the officers joined the parade. There was a ripple of laughter from the watching crowd as the officers tried to remember their drill and fell in with the soldiers. The colours were marched on and the HRH Princess Anne, as the Guest of Honour, turned up and presented roses to those on parade. The soldiers on the way to the Minden Battle picked roses from the local gardeners and wore them during the battle. The parade continued with the handover of the colours. Many of us finding that standing still at attention for ten minutes had a rather ill effect on our knees and the first few steps of the march through the town was more of a shuffle.

The march through the town was an amazing experience, led by the pipe band, we marched through the town of Berwick. The streets were three deep with cheering and clapping townsfolk and tourists. After the march it was back to the beer tent for ‘refreshments’ and lunch. This was the opportunity to catch up with old comrades, and for them to remind you of all the awful and incompetent things you did as a young officer, which you had conveniently forgotten! There was much laughter, telling of tales and good cheer!

One of the things I was thinking about, which is relevant to business continuity, was the importance of relationships.

In the heat of a disaster, it is very difficult to build relationships and to build the trust between team members. In army operations this is vitally important, as you have to entrust your life to other team members. The army hierarchy help in this, but it still boils down to trusting people.

Before you go away on operations, you train with those you work with, and you build team spirit. Meeting my old NCOs brought back the memories of building that trust and knowing that you could work together. 1.The old military adage, train hard, fight easy is still as relevant today for us business continuity people. By training, we build the relationships within our incident teams, which allow us to effectively manage an incident. 2. Establishing relationships with those external to the organisation is vitally important as well. Identify your “interested parties” and those you are likely to have to work with during an incident. It is much easier to ring up “Bob” at the police station to find out why there is a cordon around your office, rather than to try and get the information out of the person who answers the phone. 3. My final point is about culture and symbols. To the KOSB, the colours are of huge significance, and to lose them would be a huge blow to the prestige and standing of the regiment. To the outsider they are two rather fancy flags.

As business continuity people, we have to understand our organisation, and the people we work with, building on trust and teamwork.